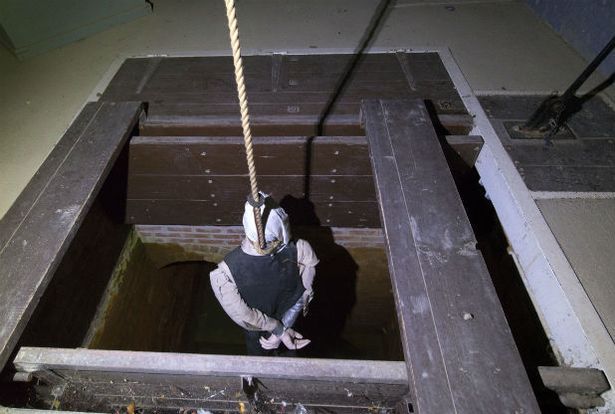 Many women lost their lives at Cornwall‘s sinister Bodmin Jail.

Built during George II’s reign, the prison hosted many public executions for about 200 years.

They were quite the spectacle and drew a jeering crowd from miles around, who peered through the gaps in the gates to catch a glimpse of the action.

Criminals were hanged, dying by suffocation, until the ‘long drop’ method was invented.

Introduced in 1872 by William Marwood, the new method determined how much slack would be provided in the rope, according to the criminal’s measurements, so that their neck would break, but they would not be decapitated.

In addition to those who were actually executed in Cornwall, many were sent to Australia and the colonies. Magistrates believed that if the journey didn’t kill them then the diseases and other dangers of the new world definitely would.

A comprehensive list of the executions, which can be found here, details exactly who was executed in Cornwall, when they were executed and for what crime.

In the 18th and 19th century, at least 12 women were hanged at Bodmin Jail.

Most of them were in their 20s and had been convicted for murder.

We remember their stories below:

She was hanged on or about 20 August 1742 for the murder of her illegitimate child.

She was executed on or about 27 March 1746 for the murder of Alexander Mellows.

Catherine was actually hanged at Launceston. She died on Monday, April 1, 1771, for the murder of her female illegitimate child.

She was hanged on Friday, August 9, 1771, for the murder of her female illegitimate child.

She was executed on Friday, 29th March, 1776, for the murder of a male illegitimate child.

Both women were executed in June 1812 for the murder of an illegitimate infant at Lower St. Columb.

She was hanged in front of a large crowd on September 6, 1813, for setting fire to her former boss’ mow of corn. She was 20 years old.

Bodmin Jail’s book of executions reads: “On the 28th of May 1813 Elizabeth Osborne went out at night with just one purpose in mind,and that was to exact revenge on her former employer John Lobb. Why she bore such agrudge against John Lobb is not known, but she had been discharged from his employ three years earlier.

“Elizabeth had been apprenticed to John Lobb and had lived with him for about seven or eight years. For whatever reason only known to her, she went out that night and set fire to a mow of corn; even to the point of afterwards telling people what she had done. Elizabeth was tried before a grand jury on August 16th”.

She was executed on Saturday, August 12, 1820, for causing the death of her husband Henry Polgrean by putting rat poison in his food. She was 34.

“Sarah Polgrean was born of poor parents, in the parish of Gulval, about the year 1786 or 1788,” Bodmin Jail documents report.

“Her father was killed in an accident, in London. Her mother deserted her when four months old, and left her chargeable to the parish. She had no education, not being able to read or write. She was apprenticed at 9 years of age and during her apprenticeship yielded to the seduction of a fellow servant. After her time expired she lived in many places, but never settled in any of them; and about 10 years since she left Cornwall, to join her mother at Dock, who was an indifferent character, and is since dead, She lived in Dock for a few months, where she had some religious impressions, and married a soldier, who took her into the neighbourhood of London. Her husband and she parted by mutual consent, and she first returned to Dock, and afterwards to Cornwall, where she met the late H. Polgrean, and married him.

“She was convicted on the clearest evidence, of purchasing arsenic, at Penzance, for the alleged purpose of poisoning rats, though it was proved the house had never been infested with them. The surgeons and other witnesses proved the illness of the deceased and the prisoner’s concealment of it: they also proved that he had died by poison, having examined the contents of the stomach, after the body of the deceased had been disinterred, although he had been buried eleven days.”

It was also proven that the couple had lived unhappily together.

“The prisoner has confessed that she mixed the arsenic in a piece of butter, taken from a half pound, on Saturday afternoon, the 15th of July; that at supper time she proposed to her husband to eat a piece already cut off, and buttered his bread with it, whilst she eat from the larger piece herself,” the document continues.

“She attributed her crimes to the want of religious education, and her early seduction. She solemnly declared that she was not instigated to commit the crime by any man, and that his well-founded jealously and her aversion to him induced her to do it. She expresses her free forgiveness of all whom she conceived to have injured her, lamented, and after trial, the expressions she had uttered towards some of the witnesses against her, and hoped that her end would be a warning to all who might be tempted to commit such crimes as hers, especially those of adultery and murder.”

Elizabeth, 22, was hanged on Friday, August 8, 1828, before a very large crowd. She was convicted of murdering her illegitimate child soon after birth.

Bodmin Jail bosses think that a dissection of her body may possibly have been carried out in public as a warning to others.

She was born in Roche in 1806 and lost both of her parents when she was a child. At 20, she was placed with a Mr Busistow of Tywardreth.

“During her time with Mr Busistow she was very idle and totally indifferent to anything good,also becoming pregnant to another servant; she had to conceal the ever-growing bump from all at the household,” Bodmin Jail’s Book of Executions read.

“On the 23rd July 1828 she started in labour at about five o’clock in the morning and pretended that the pains were caused by bowel trouble to the apprentice girl who shared her room. After a while she got up and went to the pump house where she lay down as the labour pains continued. From here she then went to the cowshed where she gave birth to a son. Soon after the birth the master of the house found her.

“The child cried once when the master was present, and she put the child into a crib where she covered it with chaff as he cried again. When the child had cried for the second time she picked him up and battered his head against the wall of the crib thus silencing him forever. The deed done, she sat down where she was before and did not look at the little life that she had stilled, and awaited her master’s return.On his return Mr Busistow sent for the constables, Elizabeth was arrested and charged with infanticide.”

She was executed on August 15, 1878, for the murder of her youngest child Henry, who was two years old. Her execution, which was the first at Bodmin in 16 years, was carried out by William Marwood using the ‘long drop’ method. Her last words were noted as ‘Lord, deliver me from this miserable world’. She was 28 years old.

“The accused it will be remembered, threw her child down a well, and at her trial alleged she had been induced to do it by a man named James Westwood, who was courting her, and who, she said, promised to marry her if she got rid of the child,” a Bodmin Jail document reads.

“The Jury who found her guilty, recommended her to mercy, on the ground of her previous love for her children, and because they considered the murder was unpremeditated: but, Mr. Justice Denman, in passing sentence of death, implored the accused not to rest upon the recommendation, although he would forward it to the proper quarter. Since then appeals from all parts of the country have been sent to the Home Secretary, praying for remission of the sentence, but without avail.”

Five crashes on A30 as freak hailstorm cause chaos for drivers