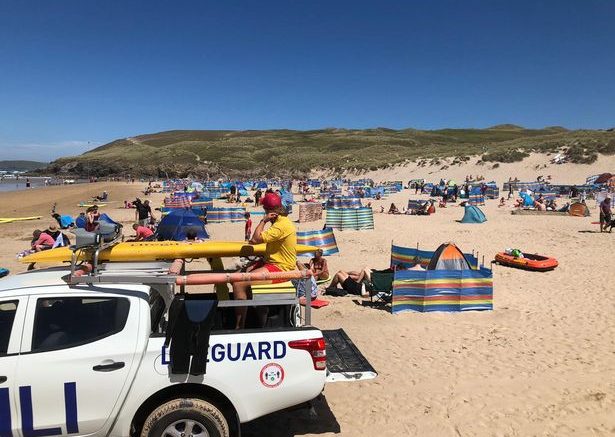 As well as dealing with multiple human rescues over the past few days, RNLI lifeguards dealt with a more unusual incident.

Lifeguards patrolling a stretch of just seven beaches along the north coast of Cornwall dealt with 372 incidents, including an animal rescue this weekend.

Lifeguards on a busy Perranporth – which saw 14,000 visitors on Thursday, July 30 alone – dealt with 30 rescues on Sunday as well as first aids as the charity reported beaches around the region were busier than ever.

Among all the human rescues, lifeguards also dealt with a terrapin – a fresh water turtle – which had been missing from its owners for six weeks.

The terrapin had escaped and travelled downstream for almost two miles before being picked up by a member of the public and handed to the lifeguards at Perranporth beach on Friday (July 31).

The owners were delighted when they heard it had turned up at the beach via a community Facebook page.

In total, RNLI lifeguards who patrol the seven beaches between Portreath to Holywell Bay, rescued 38 people from the water, with an additional 245 people assisted back to shore, 16 lost children, 64 minor first aids and seven major first aids.

In another animal rescue, Perranporth lifeguards came to the aid of a tired buzzard that was retrieved from the sea.

RNLI lifeguard supervisor Ben Gardiner said: “The beaches are the busiest we have ever seen them, Perranporth beach recorded 14,000 beach goers on Thursday alone and this is just a snapshot of seven of the 45 beaches in Cornwall that are providing a lifeguard service this summer, but reflective of the picture around the coast.

“It’s the kind of numbers and scenes we expect on a Bank Holiday weekend, but at the moment it is every single day.”

Ben added: “It’s great to see people enjoying the coast and we’d really urge people coming to the beach to heed the safety advise from lifeguards, please keep an eye on your children, stay within the flags, and within your depth. The surf that comes in from the Atlantic creates strong rip currents on most of the beaches along the north coast, catching those not used to these conditions out.

“We’d like to remind the public that our lifeguards must always be approached with social distancing in mind and to always stand 2m away from the lifeguard when talking to them so they can keep themselves and the public safe.”

Adult and child pedestrians hurt in collision with car – updates

The murdering mums and wicked wife that were hanged in Cornwall