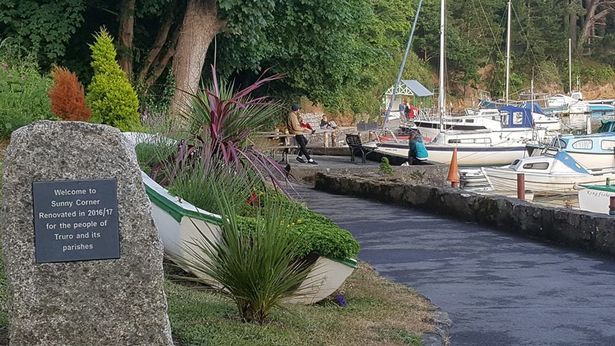 It’s one of the most beautiful spots in Truro and yet four years ago it was in a state of ruin.

Fortunately a band of volunteers decided that Sunny Corner had too much history to be allowed to decline further.

So they raised funds and worked tirelessly to turn the riverside spot into the beautiful haven of peace it is now.

Despite Sunny Corner being popular with many Truronians, there are still a lot of people who don’t know it exists, tucked away as it is between the city’s Boscawen Park and the waterside village of Malpas.

It was built around 100 years ago by Truro Swimming Club, which, at the time, was all-male and gave the members an area to change. The area was used by the club for decades with many Truronians learning to swim at the gorgeous spot.

One of those was well-known Truro boy Paul Caruana – who started Truro Day.

He told Cornwall Live: “The swimming club used it in the mid-50s and the Manpower Commission built the steps in the 1960s but in the last 20 years it had only really been used by homeless and drunks.

“I learned to swim there as a five-year-old and there’s a lot of history there for me personally.

“I used to walk through and about four years ago noticed it was about to fall down. I looked into it and found that it’s owned by four different authorities which made life difficult.”

Truro harbour owns the frontage, Cornwall Council owns from the wall backwards including all the trees, St Clement Parish Council oversees the Sunny Corner area itself while Truro City Council owns up to the entrance.

Undaunted, Paul decided that something had to be done.

He said: “We got permission from the harbourmaster to take it on board as a project, as the preferred option then was to knock it all down and let it go to rack and ruin.

“Through social media we asked if there were any volunteers and 15 turned up for a whole week. We rebuilt the shelter and thought, why don’t we take it on board and keep going with it and it’s never stopped since really.”

The renovation project has cost around £15,000 with money the volunteers have raised themselves, donations and a couple of Lottery grants of almost £6,000.

Additions to the area – which is a popular place for walkers – include toughened metal benches, bins, a recycling unit, picnic tables and newly laid entrance path.

Paul added: “All the benches have been sponsored and have plaques on them, St Clement Parish Council gives a donation each year and the harbourmaster covers the cost of bin liners.

“We get a lot of generous donations from people – this week a lady stopped me and gave me a card and inside was £20. That happens regularly.”

Run by committee of five, which meets every three months, the volunteers organise raffles and three functions a year – a barbecue, cream tea and a carol service, all of which add to the maintenance funds for Sunny Corner.

“We have a weekly crew of people who come down from as far as Bodmin and Roche every Tuesday,” said Paul. “They’re Truro people and they have an affinity with the place.

“We keep it clean and tidy – it’s a lovely place to go and sit and reflect. The public love it and say it’s wonderful, so it gives a lot of pleasure to a lot of people.”

There are some unexpected features – when work started, the volunteers uncovered a large granite wall which had been completely covered by undergrowth. No one knows the history of the wall.

There is also a family of flowerpot men who oversee visitors who come to look out over the river. Created by Pam Annear, the family will soon have a mum.

A new addition is an Easter Island-style statue head which has been donated from St Clement and will be installed next week as a feature on the granite wall.

Arthur Fitzgerald, 90, is one of the gardeners who provide plants and flowers for the quiet haven.

Paul added: “He lost his wife five years ago and was totally lost. He had a void to fill and heard we were after volunteers, so he came down and he’s never left.”

There are further plans to give yet more back to the Truro community at Sunny Corner.

“We were going to start a Wednesday afternoon coffee club – Covid knocked it on the head but we will start it,” said Paul. “We’re very aware that a lot of people who go down there are by themselves and single. So people will be able to come down and have a coffee and a chat.”

There is nowhere nicer in Truro to do just that.

Cyclist and car crash on main road through Newquay

Footage shows two caravans burning to the ground at pub

Area breakdown as Covid-19 cases rise by 1,858 in Cornwall