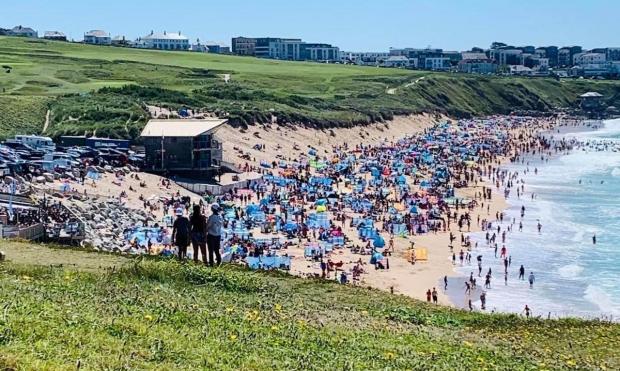 There are long delays entering Cornwall and Devon this lunchtime as a combination of holiday traffic and roadworks leads to travel hell for hundreds of motorists.

Devon and Cornwall Police issued a warning this morning that the M5 heading south at J30 and J31 near Exeter was “very busy.”

The Road Crime Unit posted a picture of the queues at 11am, adding: “Please take care driving through Devon [and] Cornwall.”

The volume of traffic heading to the south west has been compounded by a lane being closed on the exit ramp due to construction on M5 southbound at J31/A30 (Okehampton turn off).

The AA has described as “severe delays of 12 minutes” on the M5 southbound between J28/A373 Honiton Road (Cullompton / service area) and J31/A38 (Okehampton turn off) with an average speed of 20 mph.

It has also warned of “slow traffic and traffic heavier than normal, due to holiday traffic” at J29 (Exeter/Honiton) southbound, with a travel time of 20 minutes.

Yesterday the Alliance Roads Policing team with Devon and Cornwall Police warned people to “please be considered to other road users” after a driver was stopped in Devon.

The team said: “This driver was stopped and dealt with for undertaking vehicles on a busy dual carriageway and excess speed.”

Read next: Warning to book before travel as tourism chief says: ‘Cornwall campsites are full’

There are further issues on the A30, where traffic is described as “heavier than normal” and queueing in both directions from the A30 (Stowford Cross) to A382 (Whiddon Down) with a travel time of 60 minutes.

There are also “severe delays” of 12 minutes and increasing reported by the AA on the A30 westbound between the A382 (Whiddon Down) and B3260 Exeter Road (Okehampton Services), with an average speed of 15mph.

Further into Cornwall there slow traffic on A30 in both directions from A39 at Carland Cross to the A390 Chiverton Cross roundabout, with a travel time of 25 minutes.

Traffic sensors show the congestion to currently be particularly heavy around Zelah.

The average speed in the area around Chiverton Cross roundabout is reported to be around 15 mph.

Heading eastbound on the A30 the exit slip road is currently partially blocked at the A30 Carminow Cross junction due to a broken down vehicle.

Read next: Coronavirus rate in Cornwall more than doubles (but actual cases are still low)

And on the A39 northbound from the Trispen turn off to the A30 at Carland Cross there is slow traffic with a travel time of 15 minutes.

On the A3075 in Goonhavern, on Perranwell Road, there is slow traffic heading northbound.

This week the head of Visit Cornwall warned people not to travel to Cornwall without a booking, warning that campsites were “booked up.”

Malcolm Bell said: “There have been the odd cancellations where people have been able to get spaces but people coming down here should not expect to be able to find a space easily if they haven’t booked.

“The message remains to people to plan ahead and book before coming to Cornwall – many campsites are not holding waiting lists either – it’s important to book ahead.”