A TRURO-based saleroom have recently held their latest antiques and collectibles sale, with a number of lots reaching more than their estimates.

Lodge & Thomas have just celebrated their Christmas Antiques, Fine Art, Silver, Jewellery & Collectables Sale where designer fashion and vintage toys were the main attraction prior to the festive season.

As the morning settled, the sale took off with a specialist collection of RAF and associated flight memorabilia.

One lot, featuring a highly sought after ‘Observations and air gunner’s flying log book,’ soared to a strong price of £780 selling to a private collector in the North East of England, destined to be a museum piece.

Soon to follow was the Metals & Miscellaneous section, with the discovery of a pair of 19th-century ormolu cut glass table candelabras, emerging from a private West Country vendor, that eclipsed their rather modest estimate to achieve well above £1,000.

Indian, Irish and Chinese silver spiced up the next section with four mid-century Irish silver whisky tumblers sold to a buyer in central China for £420.

Alongside this, the Indian cylindrical scribes box with a foliate decoration, featuring native birds, snakes and dancing figures sold to a London collector for over £200

Designer fashion appeared to be in vogue with well-established brands, Louis Vuitton, Chanel, Hermes and Gucci gathering attention from Wales to Malta.

The lots that stole the show, however, were a Hermes silk robe decorated with hunting scenes and a Louis Vuitton grip bag with monogrammed canvas, both attaining well above their respective estimates.

The end of the day came hand in hand with the sale of vintage toys, with Corgi & Dinky lots all seeing prices exceed estimates ahead of Christmas.

A retro Action Man figure complete with a space capsule and suit reached for the stars and settled on a solid £130 to a local buyer in the room. 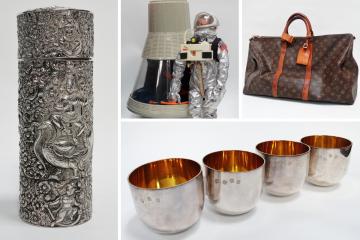