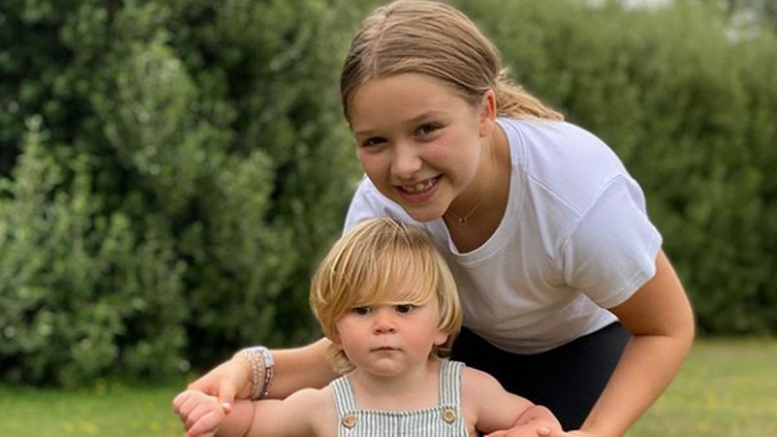 Gordon Ramsay’s adorable baby son Oscar is the spitting image of his TV chef dad as the Ramsays enjoy a weekend away with the Beckhams.

The two families reunited this past weekend in Cornwall, after the Beckham family returned from a family holiday in Greece, reports Hello! magazine.

Posh Spice Victoria herself shared some cute pictures of baby Oscar with her own daughter, Harper Seven Beckham, who was seen playing with and showering kisses on the blond-haired tot.

While Victoria’s followers were loving the cute images, many were taken aback by how close in resemblance adorable little Oscar looks to his famous hot-headed dad, reports The Mirror.

One follower wrote under the post: “Awww mini Gordon or what!”

“He looks like his daddy [blue love heart emoji]”, wrote another follower.

Finally, one was also struck by the resemblance between Harper Seven and Victoria: “For a second there I thought that Harper was you holding and kissing a baby!!! So alike from the side.”

Followers have also commented on how much Oscar looks like his dad Gordon on some of Tana’s Instagram posts of him.

Oscar is the fifth child of Gordon and wife Tana, who married in December 1996.

They also have Megan, Holly, Jack, and television presenter Matilda.

Little Oscar already has his own Instagram account that is run by his mother and older sister Matilda.

A cute post from a few weeks ago read: “Practising in my kitchen.”

The images showed little Oscar and his mop of blond hair as he played at being a chef in his family’s kitchen – supervised by his family, of course.

Could he take after his famous foul-mouthed dad?

“He is so darn cute,” noted one Instagram user.

Meanwhile, another commented: “Imagine being 1 year old and having this much clout”.

Oscar’s parents welcomed him on April 4, 2019, after Tana had previously suffered a miscarriage in 2016.

Taking to his Instagram at the time, Gordon posted: “After 3 BAFTAs and one Emmy… finally we have won an Oscar.

He really is a little gem!

Have you seen any celebs in your area? Let us know at alex.green@reachplc.com.