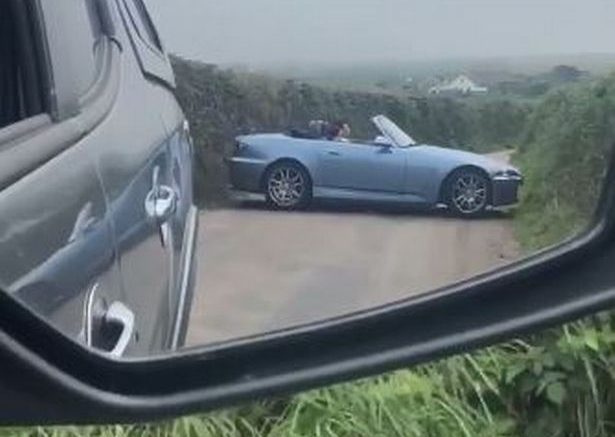 A video shot by a bemused farmer showing a convertible driver attempting the most painstaking turn in the road has spread across Facebook like wildfire.

Jamie Smith whipped out his phone and filmed the driver attempting the manoeuvre in a country lane in Sennen near Lands’ End.

The video shows the convertible driver shunting back and forth a host of times, on some occasions bouncing off the hedge, before finally being able to make off in the direction in which the car came.

Jamie said: “It happened yesterday. I was only causing a temporary roadblock for our cows coming down the road but they (the driver) obviously had more important things to do. It certainly gave me a laugh.”

Jamie shared the video and it has now been shared hundreds of times attracting scores of comments.

Posters described the manoeuvre as “painful to watch” and “unbelievable”.

Others commented saying they wished a bus came down the other way and that they hoped Jamie cheered when the car was finally able to drive off.

Two women in court for alleged roles in murder investigation