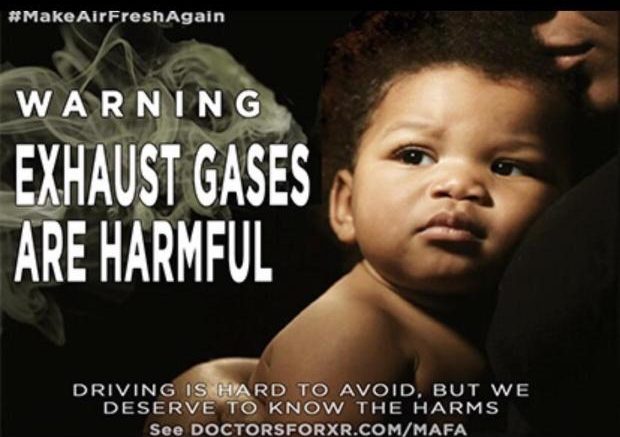 Health warning labels have been stuck to petrol pumps and banners have been unfurled throughout Cornwall.

Last night’s (Thursday) health warning labels campaign was led by the Doctors for Extinction Rebellion group, which is calling for greater transparency about the damage to health caused by fossil fuels.

Hundreds of the stickers were placed at petrol stations across the county.

One of the posters

Some local doctors are supporting the action.

Penzance based GP, Dr Helen Angel, said: “Climate change doesn’t seem to affect my personal or professional life. I hear about it in the news but life seems to go on normally.

“However, if I look carefully, I see that most of the diseases I treat are caused by pollution of our environment, our air and our food, the result of a consumer society run by big corporations polluting the planet.

“This threatens our food supply and our survival.

“We need change now. The planet is sick and we need fast treatment to resuscitate it.

Read next: The World ship targeted by protestors while docked in Falmouth

Co-founder of the Doctors for Extinction Rebellion group Dr Chris Newman said: “It is our duty as health professionals to warn the public that continued fossil fuel use is wrecking our life support systems.

“We no longer have time to ask for permission.

“As a group we will continue to do what the science and our duty of care asks of us, and we urge our government to do the same.

“And if they won’t, you can be sure the people will.”

This morning (Friday) Extinction Rebellion (XR) supporters unfurled 19 banners over the A30, A38 and other locations in Cornwall to alert the public to the growing threat of climate change.

The banners, with messages such as ‘No Future in Fossil Fuels’ and ‘Climate Emergency’, were safely secured to bridges over major roads with careful attention to the safety of motorists and in compliance with the Road Traffic Act 1988. XR supporters also adhered to safe social distancing.

One of the 19 banners unfurled in Cornwall this morning

Oliver Baines, a local farmer and XR supporter, said: “We are doing this because the government are still not telling the truth about how serious the climate and ecological crisis really is.

“This is a climate and wildlife emergency. We need to act now.”

Lesley Fitt, an accountant based in Truro, said: “We’ve had a really good response with many motorists tooting their horns in support.

“It may seem hypocritical to call for an end to dependence on fossil fuels when most of us still depend on them but we need alternatives such as affordable trains and buses so we can move away from more polluting forms of transport.

“It’s madness for planes to be cheaper than trains!”