A Truro man has appeared in court today after attempting to rob the manager of a McDonald’s restaurant in Falmouth last year.

He had been charged that on October 23 last year he attempted to rob Marcel Seehaber, the manager of McDonald’s in Dracaena Avenue, Falmouth.

He was handed a two year sentence suspended for two years by Judge Stephen Carr.

Unfortunately, due to issues with the court feed which Truro Crown Court have apologised for, The Packet was unable to view the sentencing.

After the guilty plea back in January, Judge Robert Linford deferred the case for sentencing, at the request of Prowse’s lawyer, so that reports can be compiled, including an addendum from a psychiatrist.

At the time of the attempted robbery, the national fast food chain had confirmed that there had been an ‘incident’ at its Falmouth restaurant overnight.

The entire site was closed on the Saturday morning with police tape blocking the restaurant entrance.

Entry to the car park was shut off by a row of cones, and a staff member in a high vis jacket could be seen standing outside preventing people from entering.

Both entry points to the restaurant were also taped over with blue and white police tape.

Both the restaurant and drive-thru were initially closed to customers.

The drive-thru reopened on the Saturday afternoon, but the restaurant remained closed at that time before subsequently reopening also. 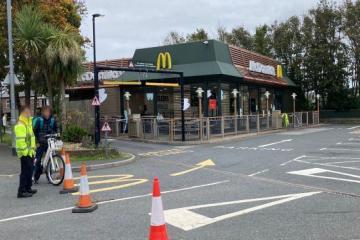 From Wadebridge to Penzance, below are the most delicious and authentic Thai restaurants in the county Cornwall Live – What’s On …

This week’s Packet Camera Club is a bumper edition! Meaning we’ve got even more of our member’s pictures and images to share with you. Falmouth Packet | Truro …

The Duchess of Cornwall visited the Antiques Roadshow as the show welcomed thousands of visitors to the in Cornwall today (Tuesday). Falmouth Packet | Truro …