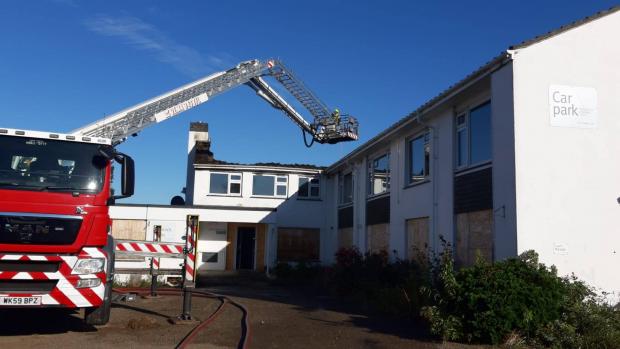 Investigations are now underway into a major fire that broke out in Truro early this morning.

Fire Critical Control received a number of 999 calls at around 2.30am reporting smoke coming from an abandoned building near Malpas in Truro.

It has since been revealed to be the site of the former Trennick Villas retirement homes.

Crews from Truro and Tolvaddon fire stations were sent along with an officer and immediately upon arriving the incident commander called for back up from Perranporth Fire Station.

A Cornwall Fire and Rescue spokesperson said: “Crews on scene reported back to Critical Control that this was a two-storey building which was well alight, where fire had spread to the roof in multiple places.”

The fire swept through the roof of the building. Photo: Tolvaddon Fire Station

A further two fire engines were called, with an aerial ladder platform also brought in to get height.

A fire service update just after 3.50am said that the crews had been joined by South West Ambulance Service and Devon and Cornwall Police in support.

At that stage there were eight pumping appliances in use and a number of supporting vehicles at the incident.

Read next: Crews across Cornwall fight large fire between Truro and Redruth

By 6am a total of 16 fire service vehicles, including eight major appliances, remained at the fire.

At 7am crews from Truro, Falmouth, Tolvaddon, Perranporth, St Just, Newquay and St Austell fire stations were still at the blaze, along with specialist officers, with “good progress being made.”

Crews from St Columb, Hayle, St Austell, Helston and Mevagissey fire stations provided cover in the area whilst this incident was ongoing.

The fire is now out and investigation work has begun.

The road to Malpas has reopened but people have been asked to take care as lots of fire officers and police remain in the area.

It is the latest large fire in a busy weekend for Cornwall’s fire crews, which has also included a large barn fire at Mount Hawke yesterday and a blaze at a community hall in Pengegon on Saturday.