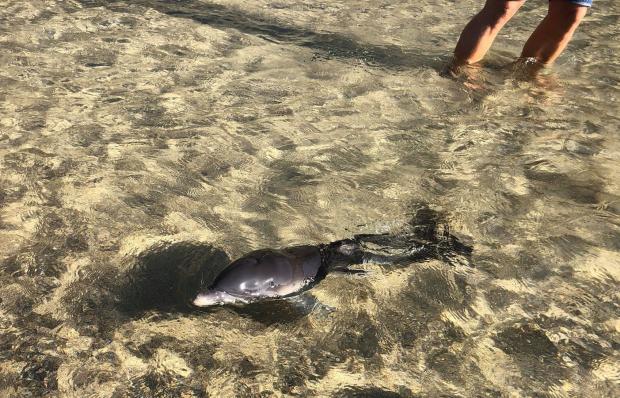 A baby dolphin has been washed ashore in north Cornwall to the amazement of beachgoers and lifeguards.

However, they were saddened to see it struggling in the surf and, despite being carried to a shallow pool at Holywell beach, it died shortly afterwards.

Matt Slater, Cornwall Wildlife Trust’s marine awareness officer, who was on the beach when it stranded, said: “It is incredibly rare to see a baby dolphin.

“The baby was weak and had rake marks on its body from the teeth of other dolphins.

“It was beautiful and tiny – I can’t believe how small they are.

“Common dolphins are one of the smallest dolphin species found in UK waters, slightly larger than a porpoise but much smaller than a bottlenose dolphin.

The tiny dolphin swimming in the water before it sadly died. Photo: Cornwall Wildlife Trust

“There have been a lot of sightings of common dolphins around our coasts in the past week.”

Members of the British Divers Marine Life Rescue were called as soon as the dolphin was spotted by the lifeguards and they responded rapidly.

Sadly, a baby dolphin this young is extremely vulnerable without its mother and it turned out that the little create was not only exhausted but badly injured.

Exactly why the baby had been separated from its mother is unknown, but there were rake marks from common dolphin teeth on the skin and the charity believes it is possible it was either rejected or separated by aggressive non-family members.

Matt added: “I have spent my lifetime on and in the sea but have never seen anything like this. It shows you how surprising and unpredictable our local seas are.

“We urge the public to be vigilant and to report any marine life they see active around our coast using our ORKS app.”

Cornwall Wildlife Trust wants the public to report marine sightings this summer using its ORKS App (Online Recording Kernow and Scilly), as part of its Cornwall Marine Bioblitz that is running through National Marine Week.

The data collected will allow the charity to understand the health of the country’s coasts and seas and the threats facing it.

The app can be download from the app store.

Anyone who finds a live animal in distress can call the British Divers Marine Life Rescue on 01825 765546.

However, if the stranded marine animal is dead call the CWT Marine Strandings hotline on 0345 2012626.